The Victorian Museum Awards, now in their 25th year, celebrate the wonderful achievements of the museum and gallery sector. This year three individuals and seven organisations were recognised with Victorian Museum awards. 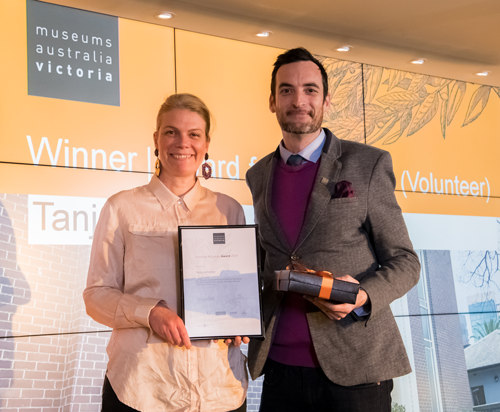 Tanja Johnston received this Award for her commitment and leadership at the Australian National Veterans Arts Museum. Tanja Johnston is the founder of the Australian National Veterans Arts Museum (ANVAM) that was established in 2013 as a cultural institution dedicated to improving the quality of life and wellbeing of defense force veterans and their families. Tanja Johnston has been delivering an art therapy program as a volunteer at the ANVAM for the past thirteen years and has supported over 1000 veterans. Tanja Johnston is noted for her vision and passion in the field of veteran's art and wellbeing. 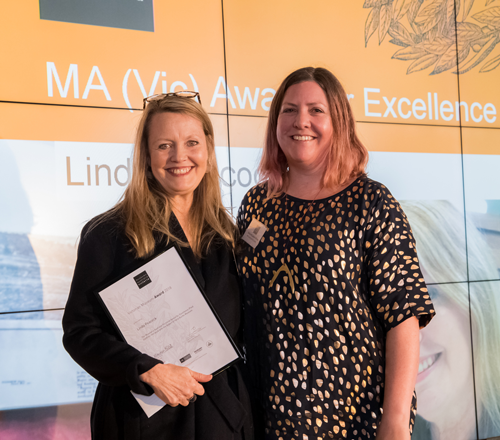 Linda Peacock received this Award for her passion for expanding the reach, scope, collaborative and advocative potential of the Robert O’Hara Burke Museum, and to utilise its collections and its spaces to motivate, challenge, highlight and expand inclusivity within and beyond the Beechworth community, while enhancing its relevance and maintaining the museum’s unique integrity. She is continually questioning the changing role of museums and is committed to minimising the impact of her work on the environment. 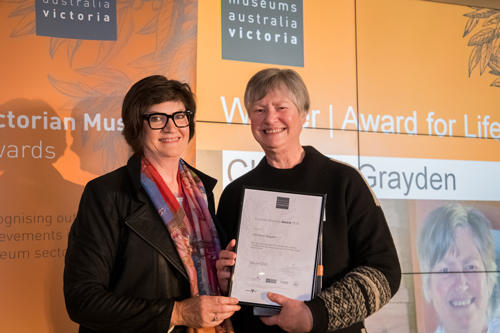 Christine Grayden received this Lifetime Achievement Award for her work for over 30 years as a tireless supporter of heritage organisations including Phillip Island Nature Parks, Phillip Island Conservation Society, Philip Island and District Historical Society (PIHS) and Friends of Churchill Island Society (FOCIS). In her recent role as the first museum curator for the historically significant Churchill Island, Christine has been responsible for the management of the collection including development of policies and procedures, cataloguing, donations, conservation, research, stocktake, community engagement, interpretation and display. Christine has been instrumental in the successful Museum Accreditation of Churchill Island Heritage. 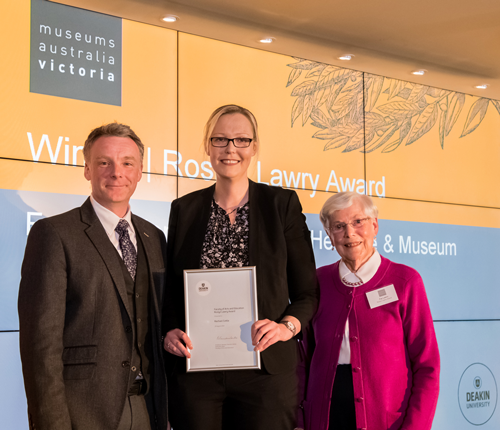 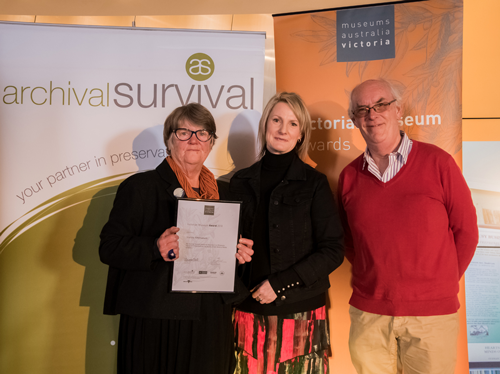 Winner: Stanley Athenaeum, for the Hearts of Gold – Minds of Mettle exhibition

The Archival Survival Award for Volunteer-Run Museums was won by the Stanley Athenaeum for their Hearts of Gold – Minds of Mettle exhibition. The exhibition told the stories of 60 extraordinary nineteenth century Stanley women. Following a creative writing workshop the Friends were inspired to research the history of women in Stanley. Curator, Ali Rowe, joined the team and condensed the research material for interpretive panels with accompanying object displays. The project uncovered previously unrecognised elements of history in the Stanley area, attracted new audiences, engaged the wider community, fostered partnerships with organisations and businesses in the area. 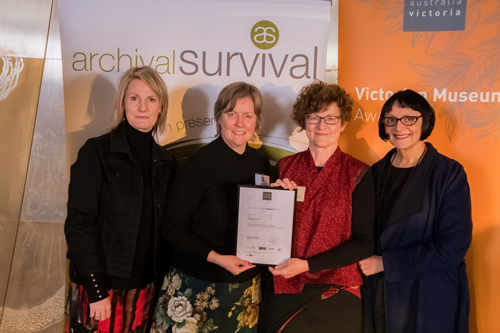 The Duldig Studio was recognised when it received the Archival Survival Award for Small Museums for their Reaching Out to Our Communities – expanding public programs at Duldig Studio. Through these programs new alliances were made with art educators, local schools, community centres, aged care facilities, art and design practitioners, and the local community. Duldig Studio is an Artists’ house museum, Gallery and Sculpture Garden in East Malvern, with four part-time staff supported by a small group of dedicated volunteers. The motto of the Studio is, ‘inspiring creative journeys’ in the spirit of the artists and teachers, Karl Duldig (1902-1986) and Slawa Duldig née Horowitz (c1902-1975) who formerly lived in the Duldig Studio. The Duldig family home was opened as a museum in 1996. 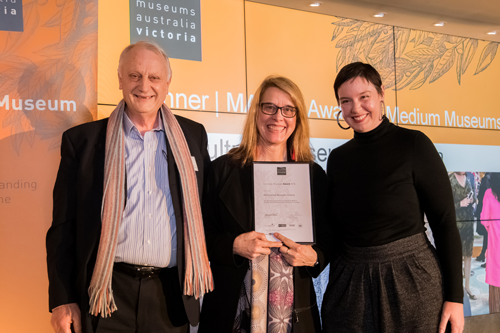 The Museums Australia (Victoria) Award for Medium Museums category, was won by Multicultural Museums Victoria for their excellent, ‘Grandmothers’ Project. The Grandmothers exhibition project was developed as the inaugural project for the newly formed Multicultural Museums Victoria (MMV). MMV is a unique cross-cultural alliance between the Chinese Museum, Co.As.It Italian Historical Society & Museo Italiano, Hellenic Museum, Islamic Museum of Australia and the Jewish Museum of Australia. The alliance has increased the five museum’s visibility and audiences and has demonstrated the capacity of the different ethno-specific museums to work together creatively to achieve shared goals. The MMV partnership demonstrates the role that contemporary museums play in progressing important dialogue around recognition and respect for cultural diversity. 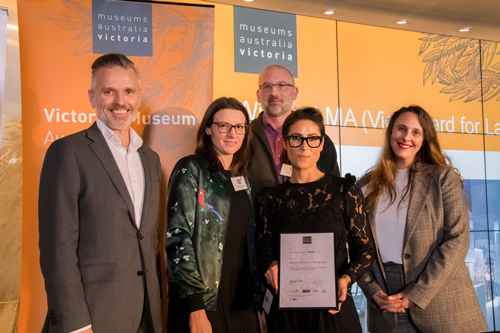 Winner: ACMI for Wonderland exhibition
ACMI (Australian Centre for the Moving Image) won the Museums Australia (Victoria) Award for Large Museums for their Wonderland exhibition. Over two years, ACMI collated a remarkable selection of behind-the-scenes material sourced from collections around the world to create this theatrical exhibition. The Wonderland team at ACMI worked with a group of Australian collaborators, transforming the usual process of exhibition development from an internal research-base to a platform that was open, collaborative and multidisciplinary. As a Melbourne Winter Masterpieces exhibition, audiences were carefully considered. ACMI partnered with autism awareness group AMAZE and offered descriptive tours for visually impaired visitors. Late Nights were programmed to engage with the LGBTQIA+ and culturally diverse communities.

This year three organisations were recognised with Victorian Collections Awards. These Awards acknowledge the hard work undertaken by organisations that are cataloguing their collections online using Victorian Collections and are judged on the number of artefacts catalogued, the proportion of items catalogued with accompanying photos, the quality of the records, the depth of historical research involved, and the percentage of records made public. 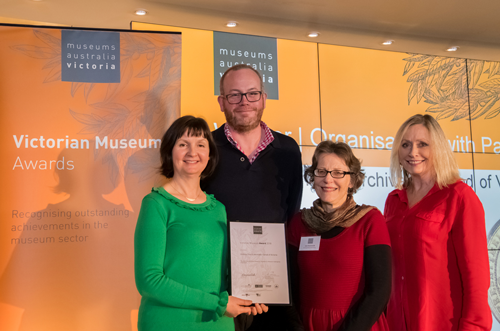 The Victorian Collections Award for Excellence for organisations with volunteer staff

The efforts of Tatura Irrigation and Wartime Camps Museum’s volunteers resulted in an additional 769 collection records of exceptional quality being made available this year. The Tatura collection features objects and artworks created by Prisoners of War and Internees in the Tatura area during the Second World War in addition to items of local significance to the Tatura district including major industries and local families. They are the recipients of the Brightsign player valued at $2,000 from Mal Padgett Design, provided with three days of professional on-site assistance.

The Victorian Collections Award for Excellence for organisations with paid staff

The Uniting Church Archives – Synod of Victoria collection contains significant holdings of Methodist, Congregational and Presbyterian material relating to the activities and history of the organisation. The judges commended the detailed cataloguing of 533 records to the Archives’ Victorian Collections page.

The Victorian Collections Award for Excellence for war heritage organisations 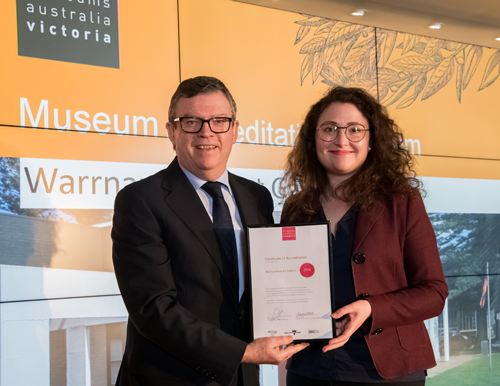 Frank McGuire, Parliamentary Secretary for Medical Research and Member for Broadmeadows, presented a certificate to the Friends of Westgarthtown Ziebell’s Farmhouse, National Wool Museum, Royal Agricultural Society of Victoria Heritage Collection and the Warrnambool Art Gallery for successfully completing the Museum Accreditation Program (MAP) this year. This gold-standard program promotes best practice across all areas of museum management in line with the National Standards for Museums and Galleries. There are currently 75 organisations Accredited and a further 18 working towards this goal.

Congratulations to all Awards and Accreditation recipients, to all Highly Commended individuals and organisations, and thank you to all our fantastic nominees. The outstanding quality of the nominations received testifies to the extraordinary vitality of the Victorian museum and gallery sector.

> Go to our Facebook page to browse the Awards photo album