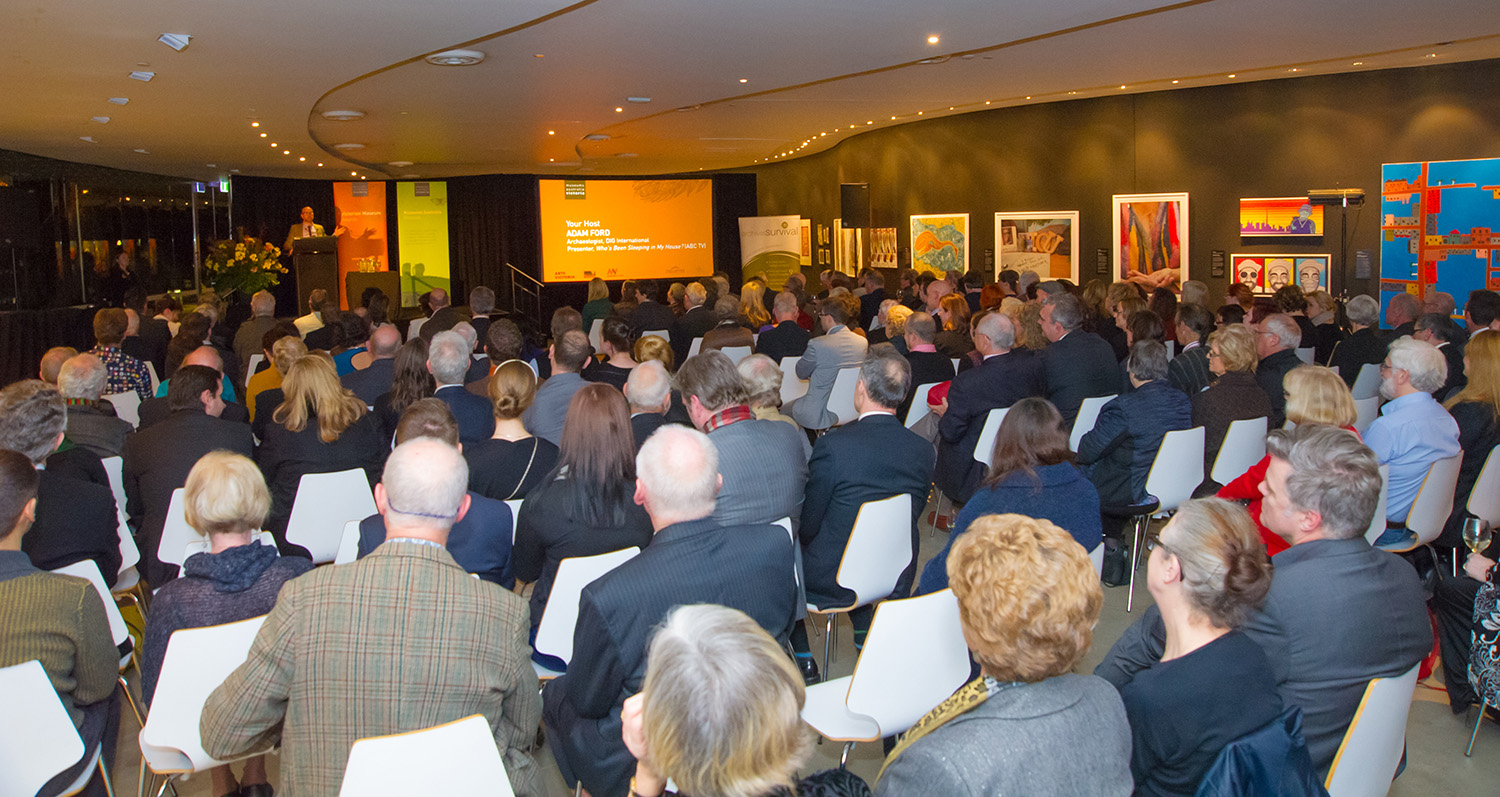 The Victorian Museum Awards celebrate the wonderful achievements of the museum and gallery sector. This year the celebration kicked off with drinks and canapés in Birrarung and was followed by an exclusive viewing of the 'First Peoples' exhibition.

As the World War II Camps Researcher for the Tatura & District Historical Society, Ms Knee, 88 years old, received her first donation to the collection in 1989, and has been responsible for the collection of the thousands of items, photographs, and records which tell the story of the World War II prisoners of war. The Awards judges commented: “We were very impressed by the way the winner of this highly competitive Award has taken a relatively unknown local story and built something marvellous around it which has now touched the lives of people worldwide. Her excellent research skills, the high standard of the museum displays and her lifelong commitment need to be recognised”.

As the Manager of the Burke Museum in Beechworth for the past two years, Mr Watt has made an important contribution in a short amount of time, increasing visitation by 32% in his first year, thanks to the development of innovative exhibitions, public programs, and school education programs. Mr Watt has secured ongoing Council funding for museum repairs and staff, and started working closely with local historical societies. The Awards judges commented: “Mr Watt has made a huge difference to his organisation in a short space of time and has already made a substantial impact on the schools and community groups of the area. Mr Watt has raised the overall standard of the museum to a new level, increased visitation, and has made the museum a place people look forward to working at and visiting”.

Archival Survival Award for Volunteer-Run Museums: Creswick Museum for the exhibition 'Spirit of China in Creswick'

The exhibition opened in March this year and highlighted the contributions made by the Chinese in the Creswick area from circa 1854 onwards. The exhibition featured a mixture of artefacts, storyboards, and artworks from both the collection of the Creswick Museum and other museums and private sources around Victoria. The Awards judges commented: “We feel the winner of this Award was a standout nomination. We are impressed with how the exhibition has uncovered a mostly unknown story of the area, and how the volunteers have unearthed stories and artefacts from the local community as well as secured loans from the larger museums in the State”. 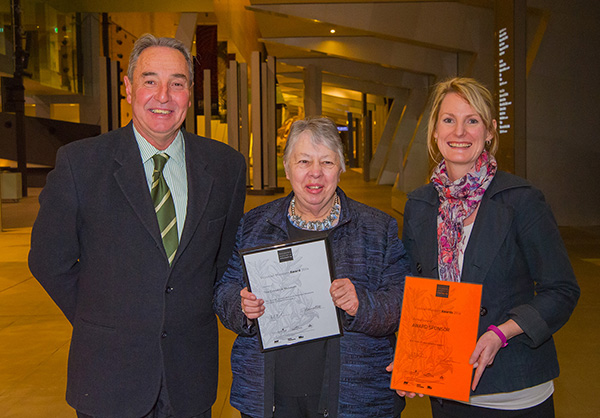 McAllister, Artistic Director of The Australian Ballet, transformed the interior of the museum into a series of spaces inspired by ten classical ballets, conveying the stories and exploring the themes of each work using the items from the collection. The Johnston Collection volunteer guides presented tours and there was also a series of 'Walk & Talks ‘with David McAllister as well as a Study Series, all initiated to engage more widely with audiences and interest groups. The Awards judges said: “We were impressed by how the curators always challenge themselves to reinvigorate and reinvent the collection and how the results are always captivating and very creative. The collaborations with other areas of Melbourne life were also seen as innovative and professional”.

The 'Reminiscence Cottage' project, developed in collaboration with Volunteering Geelong and Alzheimer’s Australia, was envisioned as an immersive space which feels safe and familiar for visitors with dementia and prompts reminiscence through sight, sound, touch and smell. The cottage was designed to replicate a 1930s-1950s Australian household. Visitors are supported by volunteers to engage with furnishings and other items and encouraged to recount their memories. The Awards judges commented: “the project was a beautiful piece of work and a very powerful exhibition that benefited members of the community by recreating the familiar and bringing joy to visitors. It should be seen as a great case study in innovation and best practice for other museums by stepping outside their usual area of expertise”.

Curated by Dr Colin Holden, the exhibition was presented at the State Library of Victoria in partnership with the University of Melbourne, and was the largest exhibition of works by Giovanna Battista Piranesi to be shown in Australia to date. The exhibition attracted 82,488 visitors, exceeding anticipated attendance figures by about 25,000 visitors. It was accompanied by a range of events and learning programs including 'Print-making and Piranesi', and the Italian language program 'Il Mondo di Piranesi'. The Awards judges commented: “This beautifully designed exhibition is the absolute best execution of an idea. Through thorough research, it has uncovered one of the most important collections of eighteenth-century work held in the University and the State Libraries”. 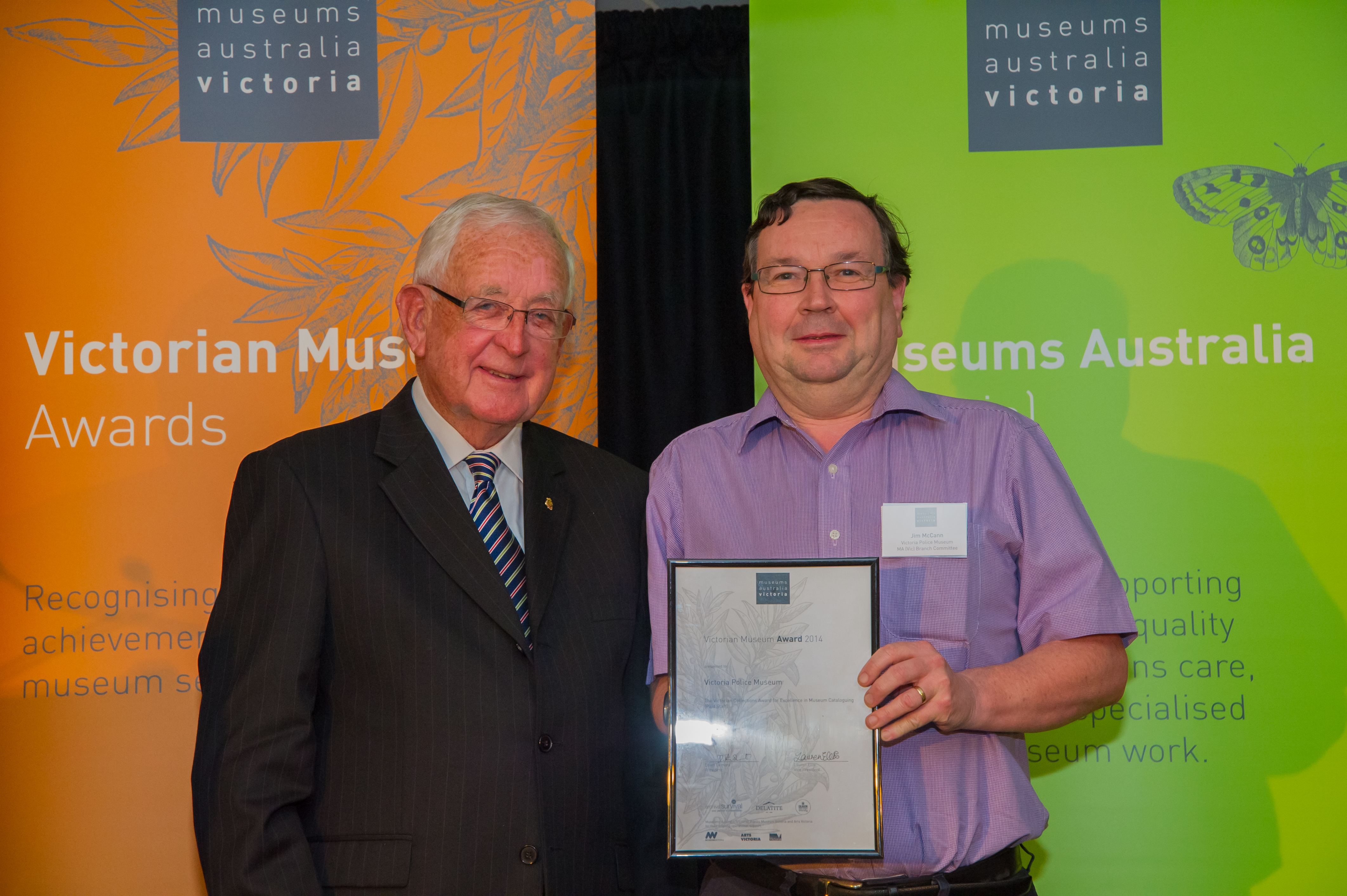 This year three Victorian Collections Awards for Excellence in Museum Cataloguing were given out. These Awards acknowledge the hard work undertaken by organisations that are cataloguing their military memorabilia collections online using Victorian Collections and are judged on the number of artefacts catalogued, the quality of the records and photographs, and the depth of historical research involved. The recipients are:

The Orbost and Districts Historical Society was chosen as winner of the Award for their wide selection of artefacts that explore many aspects of the region’s past, and for the quality of their research.

The Victoria Police Museum was chosen as winner of the award for its amazing collection of historical prisoner records and its extensive array of Kelly Gang objects and photographs.

Geelong RSL Sub-branch was chosen as winner of the award for their commitment to photographing all of their objects and the quality of their research. 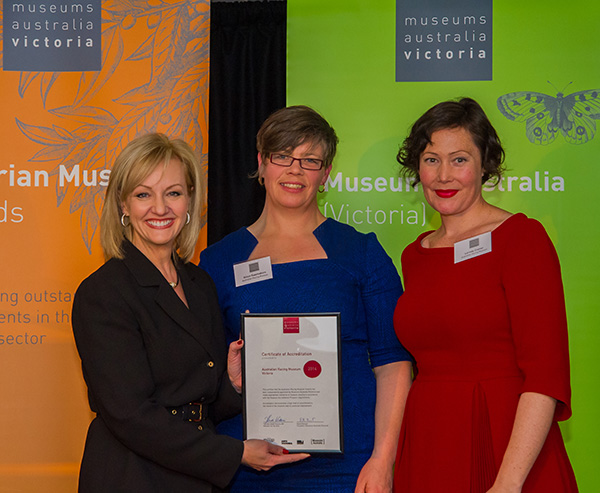 Left to right: The Hon Heidi Victoria MP, Minister for the Arts, with Alison Raaymakers and Lorinda Cramer of the Australian Racing Museum.

Congratulations to all Awards and Accreditation recipients as well as to all Nominees. This year we received a very large number of nominations, which certainly made it hard for our judges, but also testifies of the extraordinary vitality of the Victorian museum and gallery sector.

Thank You to Our 2014 Victorian Museum Awards Sponsors: