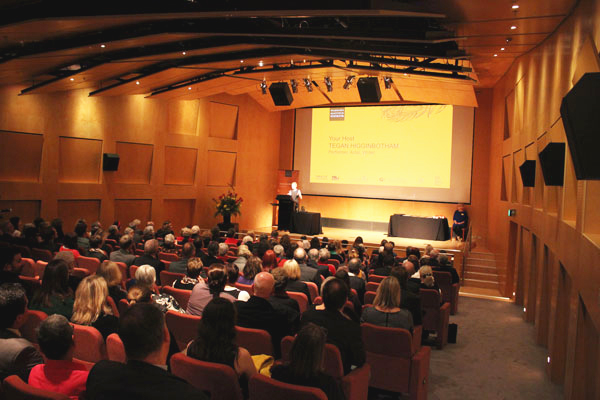 The Victorian Museum Awards celebrate the wonderful achievements of the museum and gallery sector. This year the celebration kicked off with drinks and canapés in NGV's stunning Persimmon dining room. 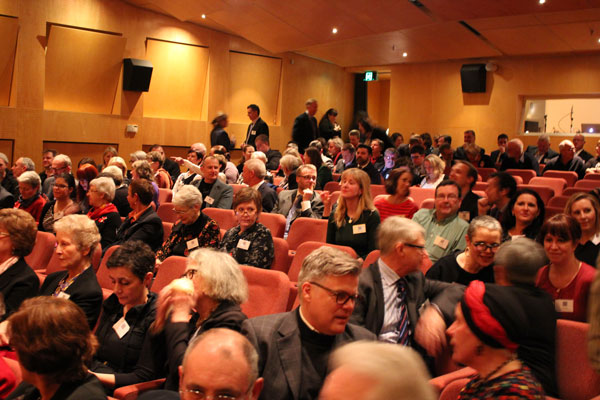 John Lindsay
John received the Award for his outstanding contribution over 42 years as a founding member and driving force behind the creation of the Accredited Flagstaff Hill Maritime Village in Warrnambool (FHMV). John drove the development of the FHMV Master Plan that included the restoration of the Lady Bay Lighthouses and Warrnambool Garrison, and the development of a maritime museum and village overlooking Lady Bay. The judges recognised John for his strong political lobbying over time and were impressed with his support for a recent major deaccession from the collection, which demonstrated that he was able to deal with the difficult decisions museums have to make to be sustainable and relevant.

Due to the outstanding quality of nominations, two Awards were given out this year:

Geoffrey Edwards
Geoffrey received the Award for his outstanding contribution in developing the significant collection at the Geelong Art Gallery over his 15 years as Director. The collection numbers over 5,500 works of art including $7 million of new acquisitions secured through ambitious fundraising programs. These new acquisitions in a range of media have enhanced the Gallery’s holdings of images of Geelong and the wider region. Geoffrey has led the management of numerous programs including conservation initiatives, improved storage facilities, an online database, a bequests program known as the Hitchcock Society, and capital works. The judges recognised Geoffrey's amazing contribution, over his career, to the Galleries, Libraries, Archives and Museum sector.

Deborah Tout-Smith
Deborah Tout-Smith received the Award for her work on the exemplary Love & Sorrow exhibition at Melbourne Museum, and for involving people and communities. As lead Curator for Love & Sorrow, Deborah used soldiers’ diaries from Museum Victoria’s collection to make contact with descendants, collect their stories for the exhibition, and reveal the personal and generational impact of war. The judges recognised Deborah’s commitment to this project and her use of personal voices to create an exhibition that is vastly different from traditional displays memorialising war. The judges praised her for: tirelessly mobilising staff and volunteers, forming specialist advisory groups to acquire and further document the collection, and for her contribution to delivering related lectures, symposiums and public programs.

The Phillip Island and District Historical Society
The Historical Society has received the Award for the Phillip Island and San Remo Oral History Radio Project. Working with the South Gippsland Community Radio Station 3MFM, the Phillip Island and District Historical Society produced a series of 17 talks about the area for broadcast. The Society’s Secretary, Christine Grayden, co-ordinated the project with assistance from a Public Records Office of Victoria (PROV) Local History Grant. The judges were delighted to award this beautifully conceived and delivered project. They thought it was innovative in its use of contemporary media and its collaborative engagement with people in the wider community. The judges praised the training undertaken by the volunteers, the focus on stories rather than objects, the realisation of the importance of recording intangible heritage, and the fantastic selection of topics. The judges admired the availability and promotion of the stories that made them more accessible. The project was regarded as a wonderful way to involve people in the community.

Caulfield RSL Sub-Branch
The Caulfield RSL has received the Award for the Back to Gallipoli exhibition that opened on Anzac Day. Approximately 20,000 visitors to the exhibition were transported back to Turkey in 1915 with recreated Gallipoli trenches, 2,599 sandbags, replicated scenes using wall-mounted photographs, and simulated artillery with hundreds of props. Kevin Sheedy presided over the exhibition’s media launch and commented on 3AW, “I implore everyone to get down to Caulfield RSL and take this amazing exhibition in. You can smell it. One of the best things I’ve seen done anywhere.” The Awards judges were impressed with this timely exhibition and the huge construction effort that took place in a short space of time. They thought the nature of this exhibition was fabulous, that it was contemporary and fresh, that “it had a sense of cinema.” The dedication of the staff and volunteers involved was highly praised. The judges applauded the museum for the visitation levels to the exhibition, the huge number of schools who visited and the level of media attention it received. 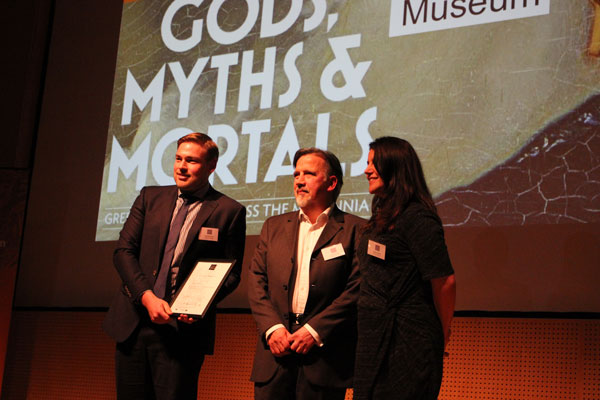 The Museum received the Award for the Gods, Myths and Mortals exhibition launched in September 2014 for display over the next 10 years. In 2013, the Hellenic Museum secured a long-term loan from the Benaki Museum in Athens, Greece. Over 150 artefacts from the Benaki Musuem, spanning 8,000 years of Greek history and culture, relate key moments and aspects of the Greek experience. The Gods, Myths and Mortals exhibition is divided, chronologically, into four periods in a design inspired by the labyrinth, from the myth of Theseus and the Minotaur. The judges recognised the ambitious and complex undertaking of the Hellenic Museum in bringing this exhibition to Melbourne. They were impressed by the quality of the loaned objects and the curatorial ambition and ingenious transformation of the interior spaces of the museum for the new displays. The judges admired the multicultural links that were developed for this exhibition that will be the foundation for future projects.

Museum Victoria
Museum Victoria received the Award for the Autism Friendly Museum Project, which aims to welcome and include people with an Autism Spectrum Disorder at all three Museum Victoria sites: Melbourne Museum, Scienceworks, and Immigration Museum. Since 2013, Museum Victoria has been working with AMAZE, the peak body for Autism Spectrum people in Victoria, and the Department of Early Childhood Development, to provide staff awareness and training, and online resources including social scripts and sensory maps. The judges were moved by this project and praised the Museum for its initiative in developing it. The judges commended Museum Victoria for working with peak bodies and state networks to achieve a very worthy outcome. "This project takes us into different territory where audiences are being thought of in a more granular way and the special needs of particular groups are now being seriously considered." The project was recognised as ground-breaking and innovative. 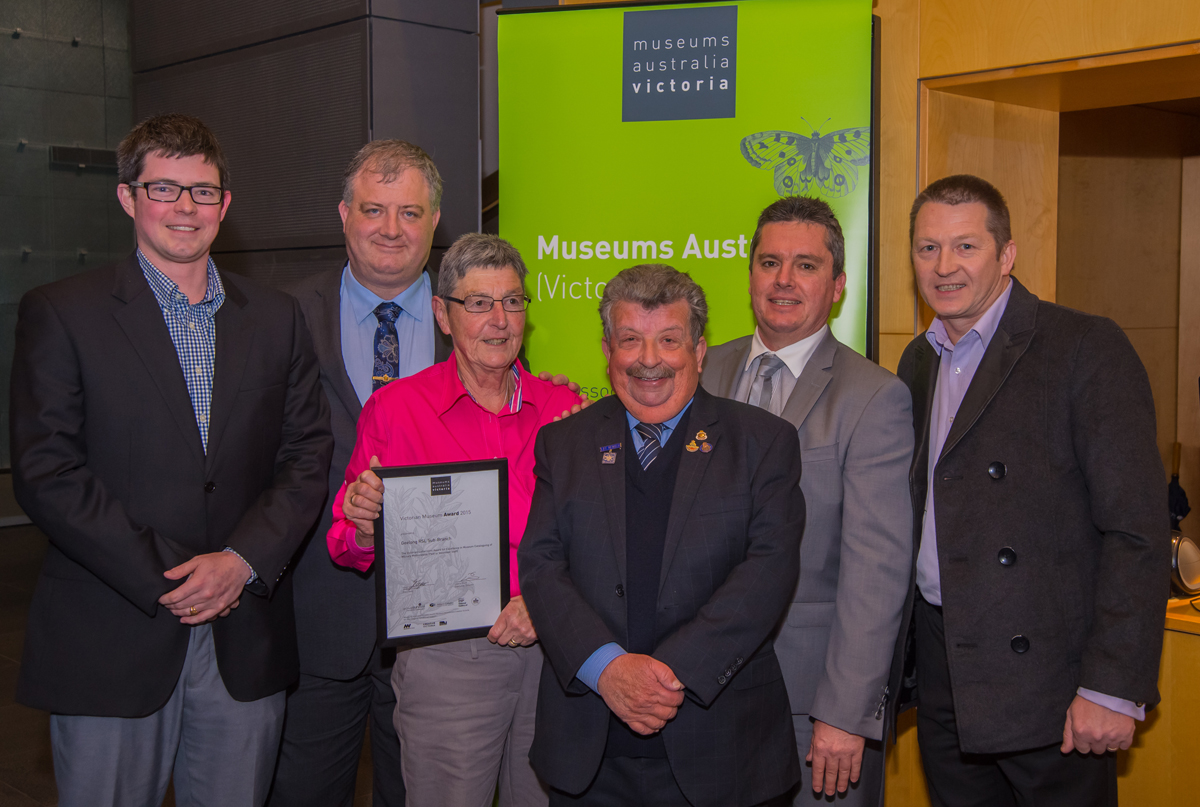 Members of the Geelong RSL Sub-Branch.

This year three Victorian Collections Awards for Excellence in Museum Cataloguing were given out. These Awards acknowledge the hard work undertaken by organisations that are cataloguing their military memorabilia collections online using Victorian Collections and are judged on the number of artefacts catalogued, the quality of the records and photographs, and the depth of historical research involved. The recipients are:

Geelong RSL Sub-Branch
The Geelong RSL was chosen as winner of the award for their outstanding records in terms of their images, historical information, and significance statements. 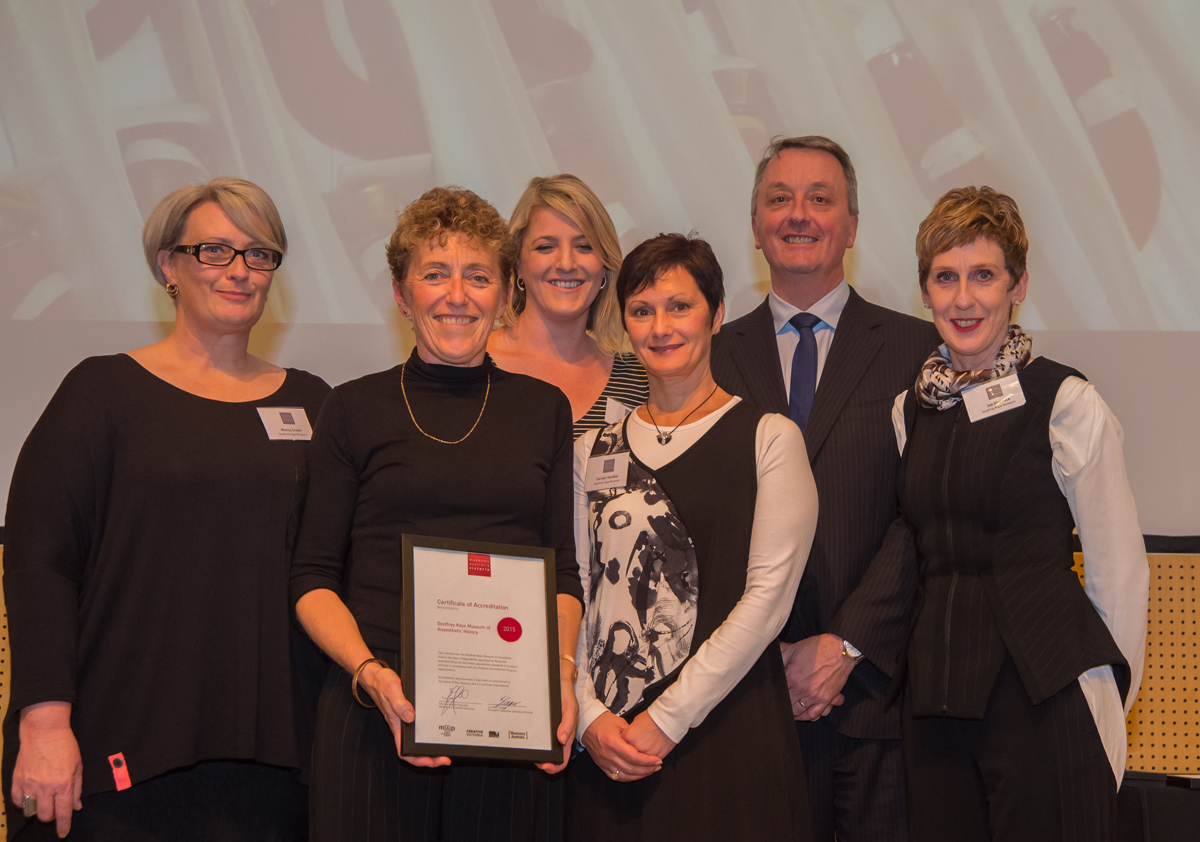 Martin Foley MP, Minister for Creative Industries, with staff and volunteers of the Geoffrey Kaye Museum of Anaesthetic History.

Congratulations to all Awards and Accreditation recipients, to all the Highly Commended, and to all the Nominees. The outstanding quality of the nominations received this year testifies to the extraordinary vitality of the Victorian museum and gallery sector.

Thank You to Our 2015 Victorian Museum Awards Sponsors